DIJF has cooperated with Danone Japan (DJ) to organize a nutrition education event which was held in the final of the DANONE NATIONS CUP 2011 in Japan.

DIJF has cooperated with Danone Japan (DJ) to organize a nutrition education event which was held in the final of the DANONE NATIONS CUP 2011.

We have also cooperated with Danone Group to create a nutrition guidebook (supervised by a registered dietitian and a nutrition advisor) and distributed at the event.On the day of the finals, the DIJF organized a talk show for the players and their parents, with Ms. Kubota(a Regisered Dietitian) and Mr. Tsuyoshi Kitazawa (a former national succor team player) present. The show was held twice both in the morning and the afternoon. Audiences got to learn about their bodies and the importance of having well-balanced meals (method of rehydration and nutritional support, dietary habit, lifestyle, etc.). 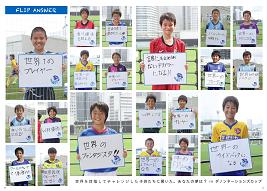 The Danone Nations Cup is the world’s biggest football tournament for children aged 10 to 12. Throughout this competition, the values of Fair Play, Openness, Sharing and Pleasure are promoted to all involved.

Each year since its creation in 2000, 2.5 million children from all 4 corners of the world participate in the event. Throughout the 40 participating countries local and national finals are o…rganised, whereby the winning team represents their respective country at the World Final.